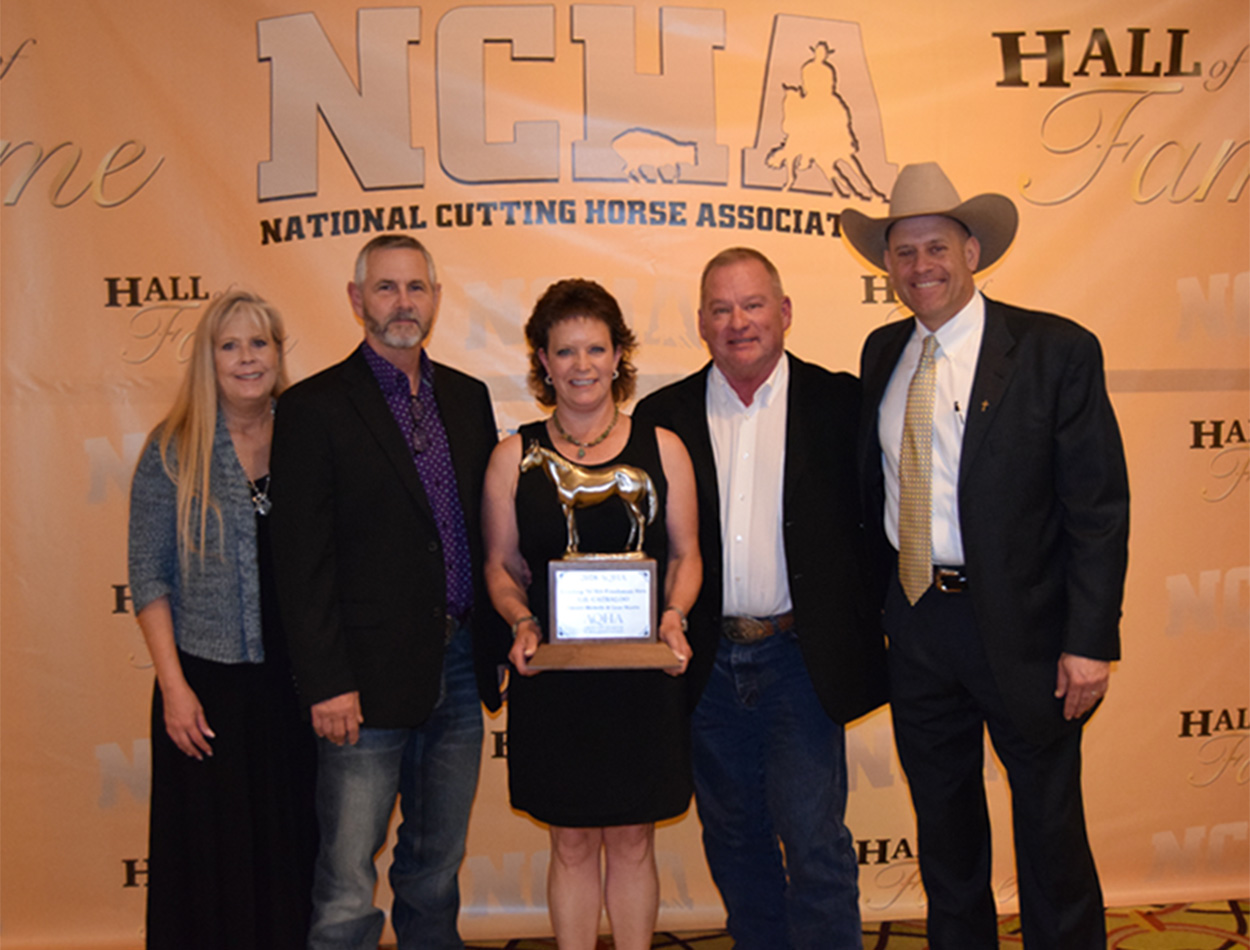 This “lil” stallion has a big heart

Gene and Michelle Morris never intended to become stallion owners. However, at the 2019 NCHA Convention, they found themselves dressed up and decked out at the Hall of Fame banquet, eagerly waiting their turn to go up on stage and accept an award for the top AQHA Leading NCHA Freshman Sire, their very own Lil Catbaloo.

“He’s our dream come true,” said Michelle Morris. “He’s our once in a lifetime horse.”

The couple had been weekend cutters and were working with trainer Mitch Davis. Davis was all too familiar with this bloodline, as he had trained Sweet Lil Boo, Lil Catbaloo’s mother.

Davis soon learned that Lil Catbaloo would be featured at the NCHA Futurity Western Bloodstock sale and urged the Morris’ to buy him. However, Davis got outbid. He approached the gentleman who bought him and asked if he’d consider selling him to Davis.

“He said, no, that he had bought the horse for some investors in South America,” Davis said. “I told him that if he ever wanted to sell him, to please call me. Well, the very next day he called and said he would sell him to me for $1,000 more than what he had paid for him. I didn’t even have that much in my checking account but I wrote the check and called Michelle up and told her she better deposit some money, quick,” he laughed.

Soon, he was in the care and training program of Davis, who knew the colt had what it took to make a champion.

“Mitch said, ‘There is something very special about this horse. He’s a freak. We need to make sure he gets entered into the Futurity,’” Morris said.

Davis continued to ride the colt for a year and a half before putting him in the training program of Lloyd Cox.

At the 2012 NCHA Futurity, the stallion was fourth in the Open. en, at the 2013 Breeder’s Invitational, Lil Catbaloo, ridden by Lloyd Cox, won the Open Derby.

“We knew we had a very special horse but after the BI we knew things were going in a very di erent direction and that we really needed to start promoting this horse,” Morris said.

Gene and Michelle began their newfound breeding program by introducing the stallion to three of their own mares.

“Our own cross has produced some very nice babies,” Morris said. “ ey’re smart, athletic, cowy and they have good dispositions. He’s passing on these great genetics to a new generation. We’re pretty excited.”

Morris further said that the young stallion has a great personality and loves to be around “his people.” He’s known affectionately as “Woody” around the barn.

“He’s a big teddy bear and he’s a big talker,” she said. “He loves people and he’s kind. He visits with you and he’s just easy to be around. Everyone at the breeding barn loves him. He kinda just has a little conversation with you when you walk into the barn.”

Slowly but surely, more mare owners are asking to breed to Lil Catbaloo.

Lil Catbaloo (High Brow Cat x Sweet Lil Boo x Peptoboonsmal) has lifetime earnings of $238,870 and his babies are all performing well in the show pen. One colt, 4-year-old Calvin Baloo, owned and ridden by Ken Schultz, has earned $61,067 and earned fourth place at the 2019 NCHA Super Stakes in the Amateur, and also earned fth in the Unlimited Amateur.

Another daughter, Bizalizaloo, owned by Russ and Jill Miller, earned fourth in the Open at the 2018 Idaho Cutting Horse Association Futurity.

Lloyd Cox praised the stallion, saying that in the show pen, “Woody” got down to business.

“He’s got a lot of eye appeal and he’s pretty,” he said. “I think one of his best attributes is how smart he is. He made me look good.”

Davis too knew that “Woody” would be one that people would continue to talk about after the shows ended.

“I think the horse trainers really remember and respect him (Lil Catbaloo),” Davis said. “It takes a long time to promote a stallion, but Gene and Michelle were ready and they’ve got this on their side by get- ting the award. I’m very proud of them.”

Morris said she and Gene couldn’t have done it without the support of Davis, who assured them that if they stuck it out, soon they would reap the bene ts of their hard work.

“Mitch just told us to hold on and hang in there, that it would all pay off in the future,” Morris said. “And, you know what? He was right.”

Morris also had to thank her family for their support while taking on a new life venture.

“This award is so special to Gene and I and our entire family,” she said. “ ey’ve been behind us 100 percent. It’s been a long ride. By the time you breed mares to the time they start showing it’s a long road. It’s a lot of blood, sweat and tears promoting a stallion, but it is so special when it all comes together like this and